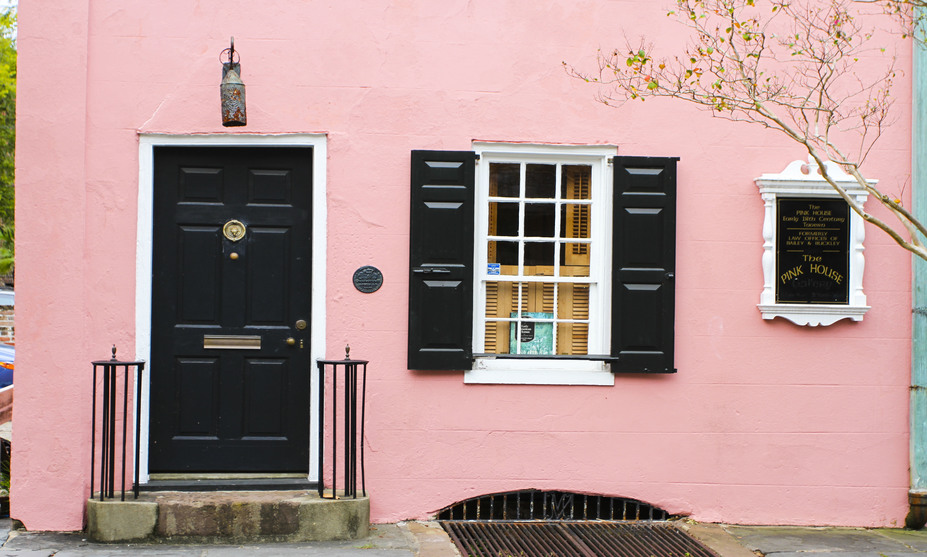 Whether you’re a first-time visitor to Charleston or a more seasoned tourist, you’ve probably heard a thing or two about the charm of the city. It’s easy to stroll down the cobblestone streets and find a bit of history around every corner, but it can also make it difficult to know where to begin. On your next visit, use this historic walking tour guide to navigate your way through the past, and discover more about the Holy City.

Built around 1712, the Pink House is believed to be the second oldest remaining structure in Charleston. Contrary to its name, it never was a house, but rather a tavern, rumored to have housed a brothel in the upper floor. It remained a tavern through the 1700s, when the neighborhood became more residential. Since then, it has been a publishing house, a law office and now an art gallery.

Turn right on Church Street and walk about half a block.

In 1726, a house was erected by a French Huguenot named Paul Douxsaint, as noted on the historic marker next to the front door. The first house burned down in the massively destructive fire of June 13-14, 1796. After the fire, the current house was built in the early Federal period style with beaded weatherboarding on the exterior, 9-over-9 windows, and a roof with dormers. In the 19th century, Daniel Macaulay, a member of one of Charleston’s leading Scottish merchant families, owned and occupied the dwelling, which led to the name its known as today.

Walk about 200 feet further along Church Street until you are standing in front of a very small graveyard. 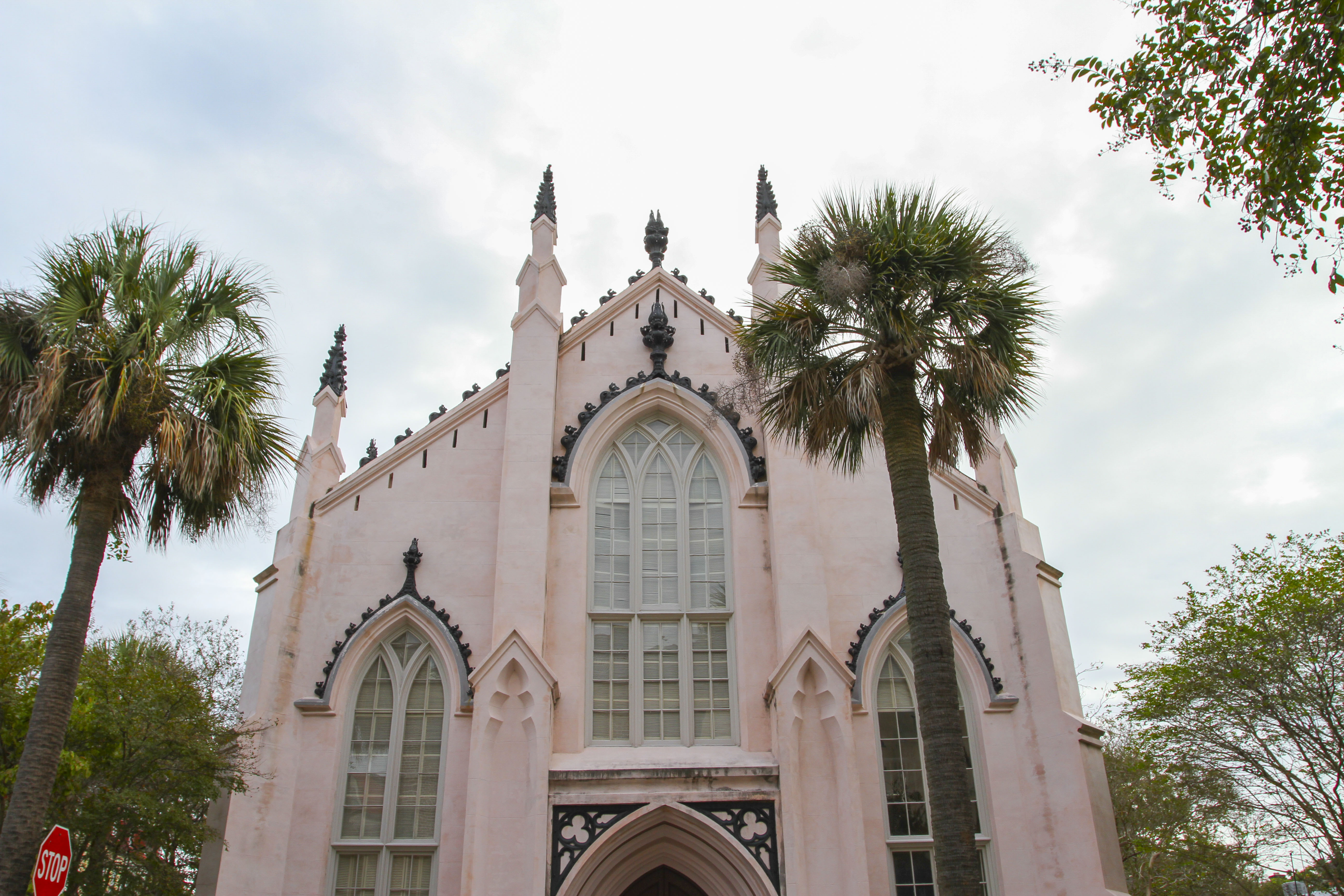 The graveyard you’re now standing in front of belongs to the pink neo-gothic building, the French Huguenot Church. Three church buildings have stood on this site; the most current of which was built in 1845. The church came to be known as the Church of the Tides because Sunday services were held based on the tidal schedule. That’s because most attendees came to town on boats from their up-river homes. Throughout the 1900s, the church was used periodically by the Huguenot Society of South Carolina for special events. Today’s congregation was reestablished in 1983 and is the only French Calvinist congregation in the United States.

Across the street from the Church and graveyard, look for a prominent two story building with a balcony. 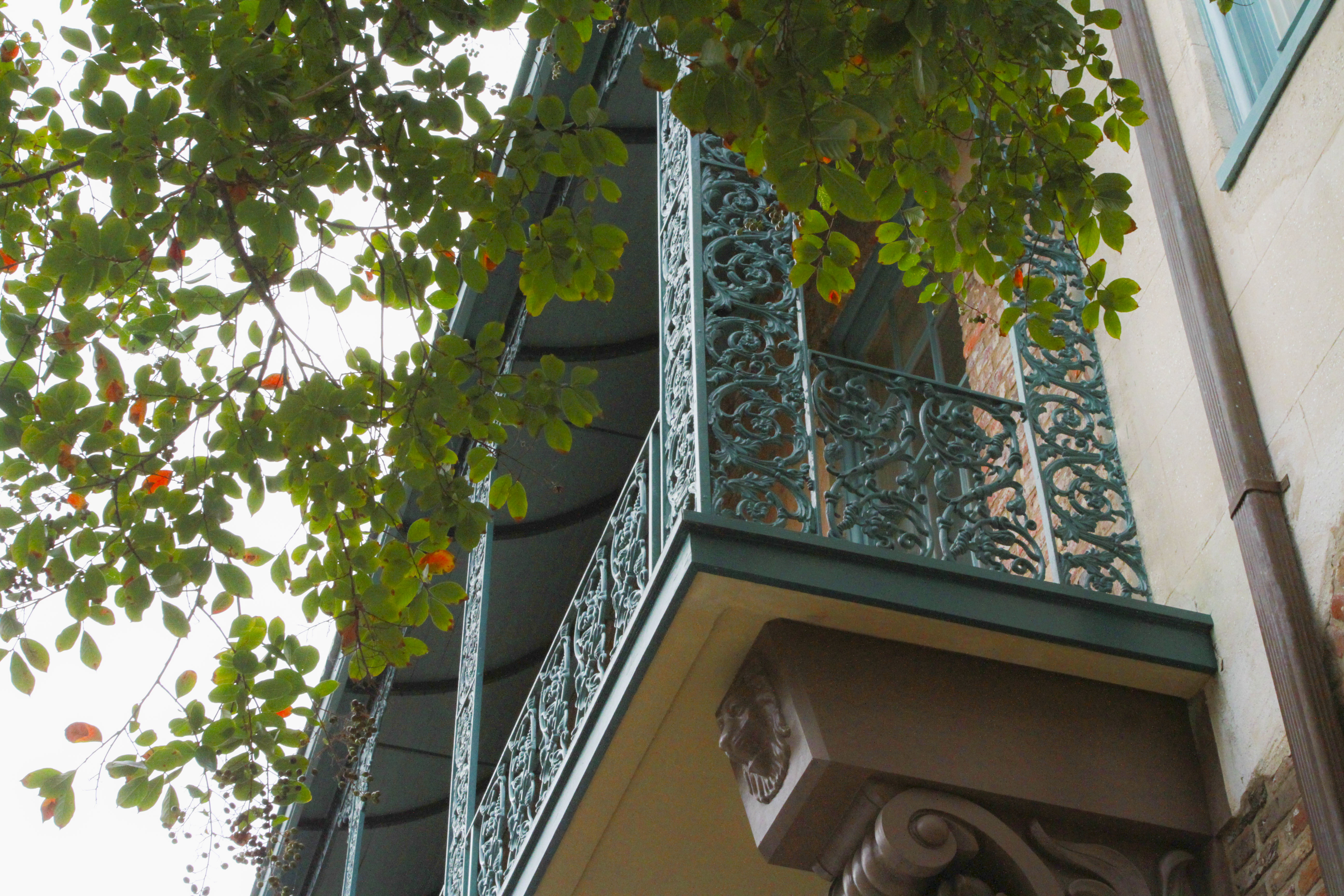 With its intricate wrought-iron balcony, this ornate building is now home to the Charleston Stage Company, South Carolina’s largest professional theater production company. Originally named The Planter’s Hotel, it is Charleston’s last surviving hotel from the Antebellum period. At that time, the hotel’s guests were mainly planters from around the state who came to Charleston for the horse-racing season. Some believe that the South’s famous Planter’s Punch may have been created here. The building itself has had several additions to it over the years, as evident from the visible differences in brick coloration.

Cross Queen Street and walk straight ahead one block. 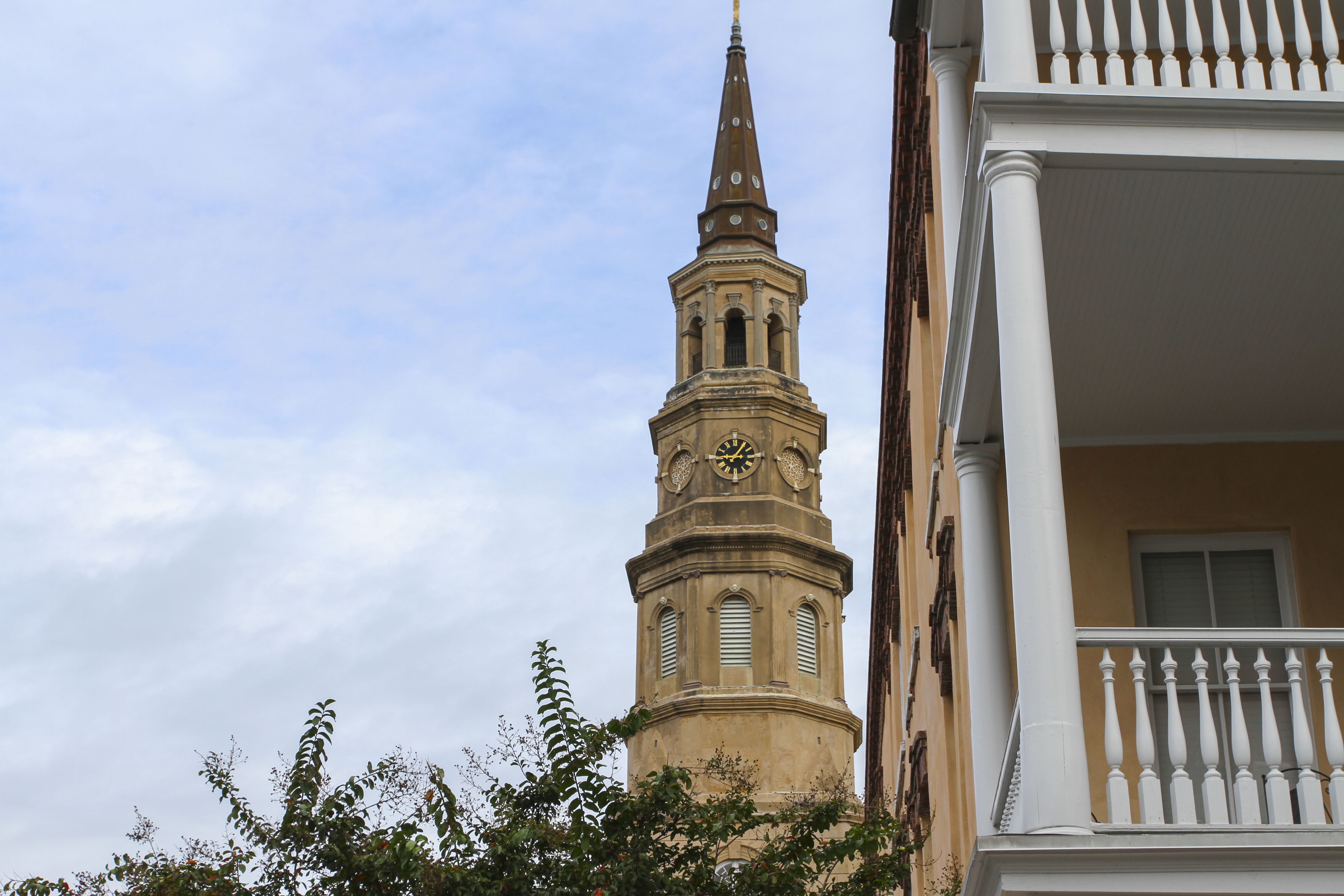 St. Phillips is home to the oldest congregation in South Carolina. In the early 18th century, a brick church was built on this site, but was destroyed by fire in 1835. The church you now see was constructed from 1835 to 1838 by architect Joseph Hyde. Many notable people from the colonial era and post-Revolutionary War years are buried in the graveyard. Several colonial governors are interned there, including Rawlins Lowndes, the governor during the Revolutionary War. Prominent early Americans are also buried there such as Christopher Gadsden, a general in the Continental Army, Daniel Huger, a member of the Continental Congress, Edward Rutledge, a signer of the Declaration of Independence and Charles Pinckney, a signer of the U.S. Constitution. Note: The building and graveyard are open to the public Monday-Friday, 10:00am to 12:00pm and 2:00pm to 4:00pm. 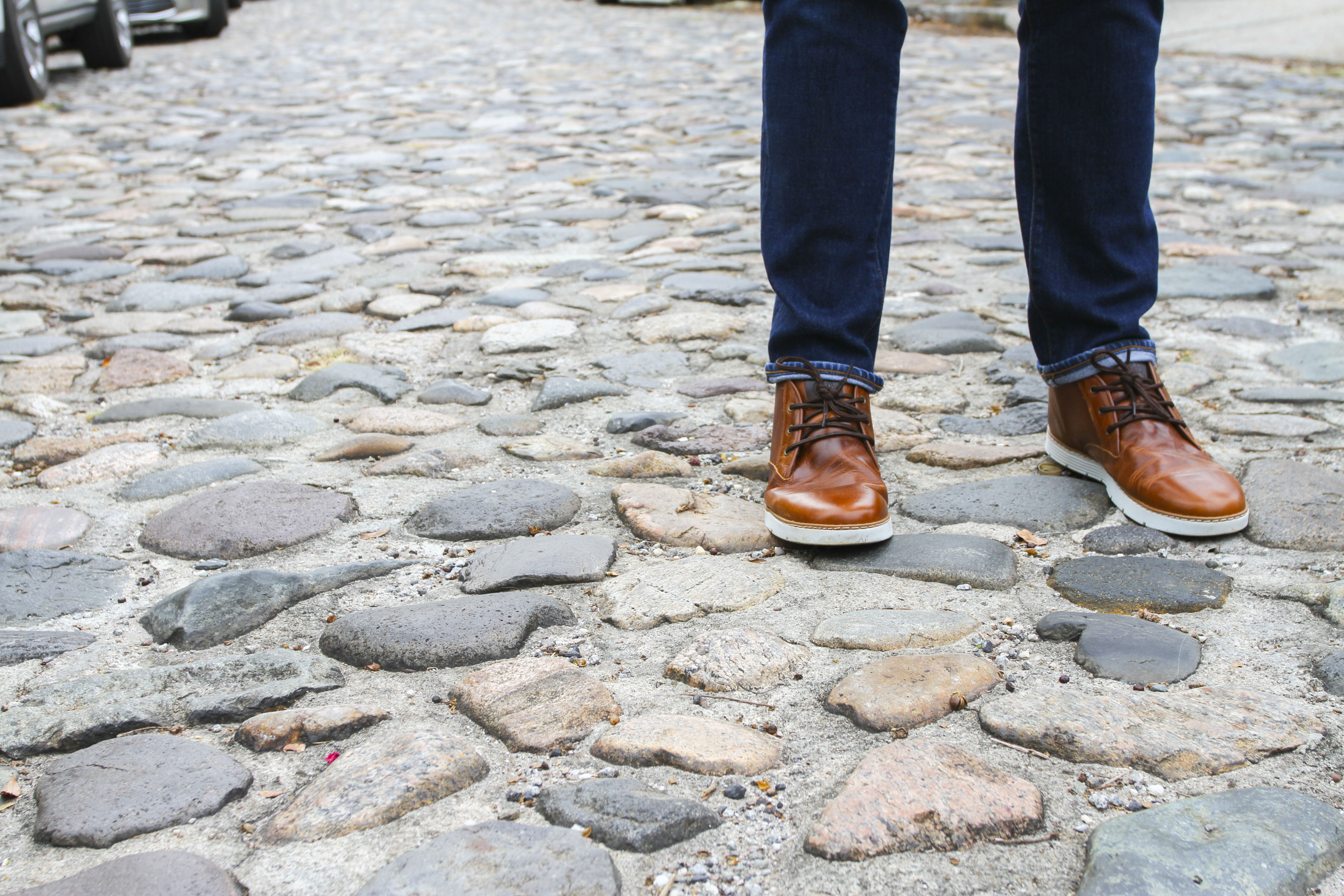 This building is so old that when it was built the word magazine had only one meaning – it was an arsenal of gunpowder from 1713 until 1748. At that time, the colony was young and was afraid of attacks by Native Americans, and French or Spanish forces also staking claim in the New World. The city was so fortified that the colonists built a wall around it, making Charleston one of only three fortified cities on the entire eastern seaboard of British Colonial America. The magazine is also the oldest public building in the state of South Carolina. In 1902, the National Society of Colonial Dames of America in The State of South Carolina bought the building to ensure its preservation as a historical landmark. They converted the magazine into a museum and it has remained one ever since.

Walk half a block north on Cumberland to Meeting Street. Turn left on Meeting Street and about halfway down the block, you will see the church and a gated path that enters the graveyard of the church.

In 1681, Charles Town settlers, including English Congregationalists, Scottish Presbyterians, and French Huguenots built a wooden meeting house in the northwest corner of the walled city. As non-followers of the Anglican Church, these settlers were considered dissenters and, by law, were not allowed to call their place of worship a “church.” They were allowed to call it a meeting house, and the street that led to the wooden building was called “Meeting House Street,” which was later shortened to Meeting Street. The current church building stands on the exact site of the wooden house. A century after its construction, the wooden meeting house was replaced with a circular brick building designed by esteemed architect Robert Mills. That church was destroyed in the Great Fire of 1861.

In 1890, the present-day church was constructed. The graveyard is the city’s oldest burial ground with monuments dating from 1695.

Follow the path in the graveyard and you will exit onto Meeting Street. 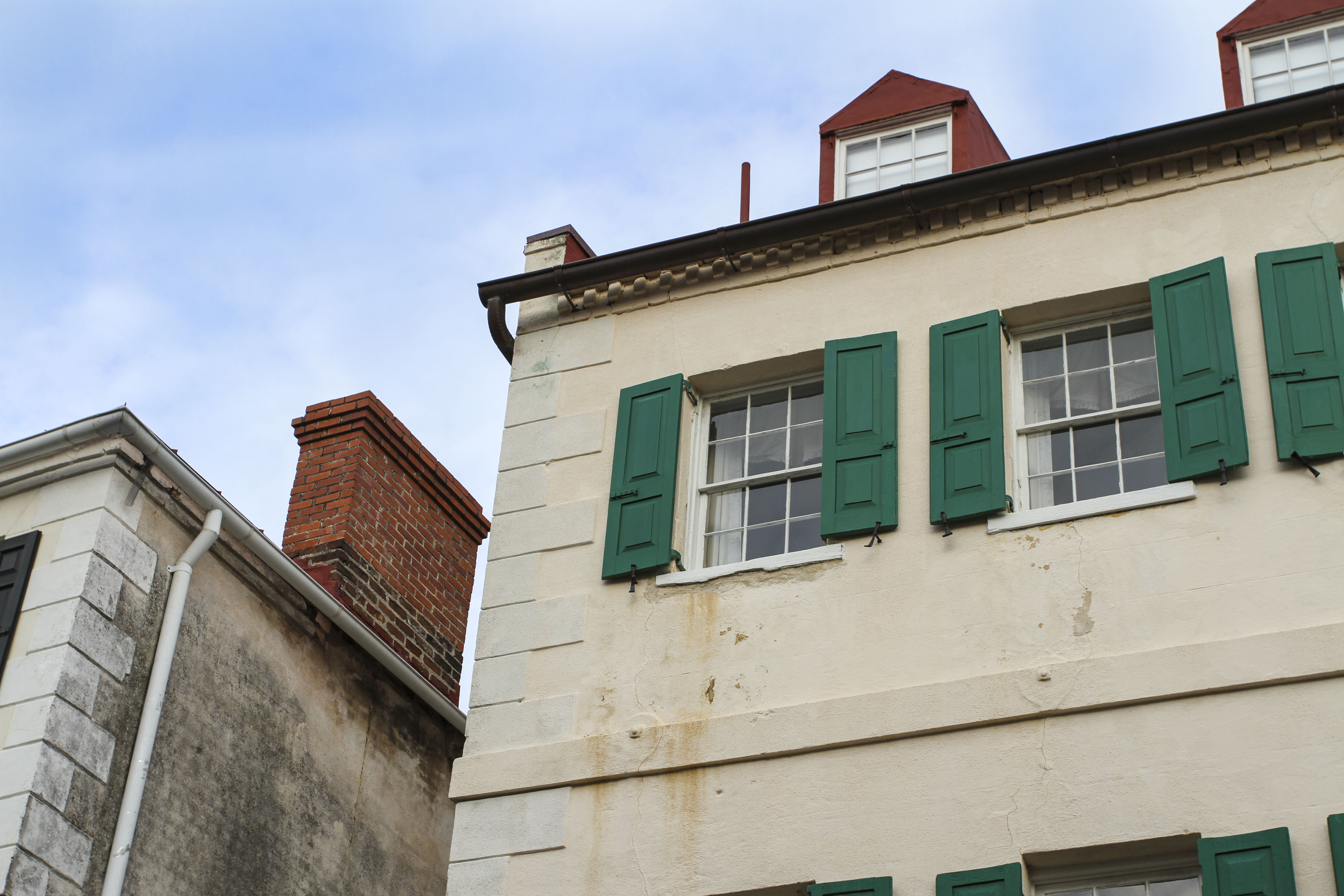 In 1861, a devastating fire ripped through the city, and Meeting Street (between Cumberland Street and Church Street) was one of many streets whose buildings were burned to the ground, including the second Circular Church. The fire started from an unknown source on the night of December 11, 1861 and burned a trail through the city until 5 a.m. of December 12. The blaze covered 540 acres and over 500 buildings were burned to the ground. More than a third of the city was gone. At the time, the damages were estimated to be 7 million dollars. This fire caused more damage to Charleston than damage caused by the events of the Civil War.

Now that the tour is complete, did you have any favorite sites? Hopefully, you snapped a few great photos and documented your experience. We’d love to see them, if so. Just tag @lifestylecommunities on Facebook or Instagram - and thanks for exploring with us. 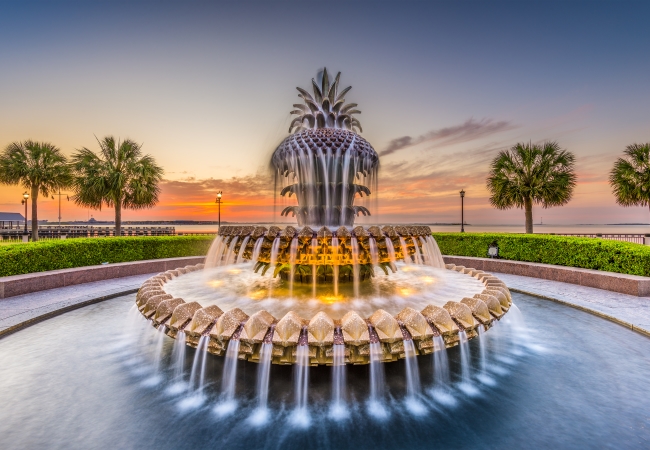